Our passionate team of experts is on hand to design your dream trip to Southern Italy.

Culinary Adventures in Puglia & Basilicata with Lyndey Milan
Spend an unforgettable week learning the secrets of a deeply passionate and undiscovered region of Southern
Italy. Puglia is the sun-drenched heel of the boot that spans two seas, the Adriatic and the Ionian. Basilicata is
its neighbor to the west. Both agricultural regions with abundant healthy soil, over 50 million olive trees and a
tradition of wine growing that has seen a fabulous dynamism in the last ten years, this area produces some
of the most exciting wines in on the planet.
LYNDEY MILAN OAM, a familiar face on television and in print, has been instrumental in changing the way Australians think about food and wine for over 30 years via her own nine best-selling cookbooks, eight TV series and influence as former Food Director of the iconic Australian Women’s Weekly. She is an award-winning multi-media presenter, MC, speaker, food & wine teacher, consultant, debater, judge and regional Australian specialist who makes numerous TV & culinary appearances. She maintains her position at the forefront of Australian cuisine and has an ability to connect with all audiences. She is also an experienced international tour host with experience across the Mediterranean from East to West, in Puglia, Japan and Australia. During her years as co-host of Fresh TV on the Nine Network, she hosted such visiting chefs as Jamie Oliver, Rick Stein and Gordon Ramsay. She travels regularly, is a member of the Australian Society of Travel Writers and has an extensive knowledge of all Mediterranean food and wine.

AUS $5499 per person based on double occupancy
Single supplement $799

Meet this afternoon in Matera and experience a walk through the Sassi with our local expert guide, who will bring this incredible city to life for you. To kick our first evening in style we will meet for an aperitivo and a first welcome toasts to Basilicata and enjoy dinner at a local prize-winning Trattoria. What a start!

We start with a visit to a bakery in Altamura for an in-depth look at the making of this extraordinary DOP bread. Next we will stroll through the northern part of Basilicata to the east around Rionero and up and down the slopes of the sleepy Mt Vulture where the volcanic soil is premise for incredible wine results with this indigenous variety. We will meet a local wine maker who crafts the best Aglianico based wines in the area for the smallest producers for collection wines. We will have a sumptuous lunch in the stunning cellar. Back in Matera tonight we will enjoy an unforgettable meal at a local restaurant.

After checking-out of your lodging in Matera, we are off to discover the secrets of cheese-making in the ancient traditions of Puglia. You will meet local cheese artisan Giorgio at his farm, where he will demonstrate the art of making fresh burrata and let you try twisting a knot of mozzarella or two! Next we will go in search of Puglia’s famous trulli houses. These cone shaped dwellings are unique to the region and in the UNESCO World Heritage Site of Alberobello you will see a concentration of over 1,000 trulli houses. Our expert guide and local superstar will bring the history of this picturesque town to life. After a delicious lunch in an authentic trulllo, it’s time for some serious relaxation at your next hotel, the beautiful country retreat, Masseria Montenapoleone

We travel to Lecce, the capital of the Salento Province. Known as the ‘Florence of the South’, the city hosts amazing Baroque masterpieces and treasures of Italy. In Lecce you will embark on a dedicated walking tour where our guide will reveal the secrets of the imposing architecture and millennia of fascinating history revealed before your very eyes. Our guide will take you to visit one of Puglia’s most renowned wineries - Li Veli. After a fascinating tour with the vineyard’s expert oenologist, you will be treated to a private lunch and wine tasting over-looking the ageing barrels of wine.

Today experience another of Puglia’s most important treasures: olive oil! We will meet Corrado at the renowned Masseria Brancati. The olive mill on this ancient estate has been in use for thousands of years and provides a fascinating insight into olive oil production. We’ll walk the beautiful grounds of the estate and of course enjoy some olive oil tasting. Then we visit the stunning White City of Ostuni, a labyrinth of white cobbled stone, more Greek than Italian. Back at the masseria this afternoon we will get busy in the kitchen with Lyndey to learn how to make the best local dishes and then feast on results!

Enjoy a morning at leisure at the masseria. For lunch we’ll head to the coast where all the locals enjoy a indulgent lunch including some of the freshest seafood on the planet. After lunch there is the option to take a stroll through the beautiful seaside towns on Monopoli or Polignano a Mare. The artisan gelato is not to be missed! For our last evening, we’ll enjoy a gala celebration with local musicians and outstanding food for an unforgettable night! 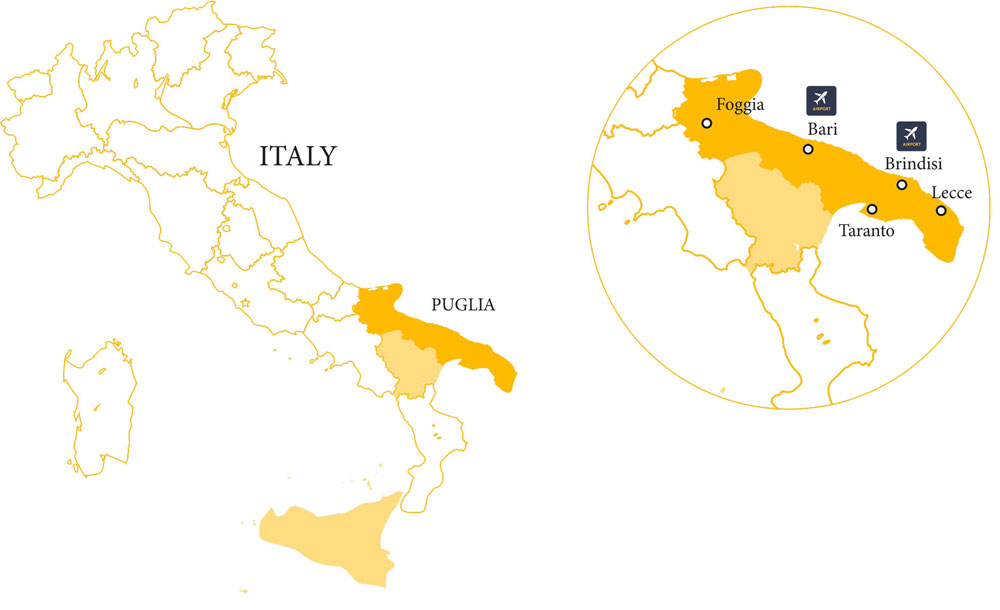